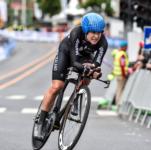 Villumsen sixth in cycling return as she eyes Commonwealth Games

Villumsen, the 2015 world champion, has returned to the sport mid-year after a lengthy break away from the bike following the Rio Olympics.

The 32 year old, who has never been out of the top-10 in the time trial at the world championships for nearly a decade, produced a strong performance on a course that suited riders with climbing skills.
“It was a tough course. It was never flat which we knew because we did the team time trial two days ago on part of the same course. It was always up or down and no flat road or rhythm to be found so it was tough,” said Villumsen.

Villumsen, who returned to the World Tour for the Team Virtu Cycling in Europe mid-season, was 14 seconds down on the leader at the first time check but worked her way up to fifth at the final split before being edged out by another former world champion in Ellen van Dijk on the closing kilometres into Bergen.
Dutch rider Annemiek van Vleuten, seriously injured in a crash in the Rio Olympic road race, took out the time trial in 28:50.35.

“I am a little bit disappointed in myself today. But I am looking forward to going back home and training again and getting back into that rhythm. I will have a little break and then really look forward to training again and see if I can make it for the Commies (Commonwealth Games),”said the Glasgow Games time trial gold medallist.

Her busy week will be completed at the weekend in the 153km road race with fellow Rio Olympian Georgia Williams, who rides for Orica Scott World Tour team.

“The road race is even hard and I’ve heard about the big climb. I have really tried to focus just on one race at a time. I don’t know what is actually coming apart from a tough race,” said Villumsen.

“Worlds is always a different race. It is not so much about who can get away rather who can stay to the end. It will be good to see if Georgia and myself can make it through to that last selection of riders.”
Earlier Auckland teenagers Oscar Elthworthy and Ben Hamilton finished 26th and 35th respectively from 78 riders in the junior men’s time trial.

Elworthy, the national junior time trial champion, went hard early and dropped a little accordingly on the climb before picking things up strongly to push up to 26th place, 1:20 from winner Thomas Pidcock (GBR).
Hamilton started conservatively and lost time when he dropped his chain over the climb, before finishing well to be 1:44 behind the winner.

The pair, part of the Barfoot & Thompson Auckland Performance Hub, will join up to tackle the 135km road race at the weekend.