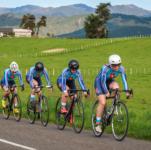 Almost 700 cyclists from 83 schools will head to the Manawatu for the 50th year of the New Zealand Schools Road Cycling Championships this weekend.

The championships are held over three days with the Team Time Trial near Levin on Saturday 30 September, the 18km lap road race near Palmerston North on Sunday, and the Points race concluding the event at the Manfeild Autocourse near Feilding on Monday.

This year is the 50th time the championship has been held in the Manawatu and organisers will be holding a number of functions to celebrate this milestone for Schools cycling including a Welcome function on Friday night, VIP areas throughout the weekend, a memorabilia display and a Schools parade at Manfeild on Monday.

Racing in their final year of Schools Cycling in the U20 Girls are Hannah Knighton (Waikatio Dio) who recently competed at the Triathlon World Champs, Abigail Morton (Baradene) who won silver in the Time Trial at the recent Youth Commonwealth games, and local Libby Arbuckle (Palmerston North Girls High) who also competed at Junior Track Worlds.

U17 Boys who are likely to feature are Josh Kench (Takapuna Grammar) who recently won a stage of the Dynamo Team Series and current National Road Champion Finn Fisher-Black of Nelson College. The U17 Girls to watch are Ally Wollaston of St Peters and Isabella Morton of Baradene who won the Individual Time Trial at the recent Northern Schools Tour

Last year Takapuna Grammar and Waikato Diocesan Schools for Girls won the overall honours in the senior division with Cambridge Middle School and Baradene prevailing in the junior competition.

The championships begin on Saturday with the Team Time Trial over 16kms with three grades - under 20 years, under 16 and Year 7/8 - at Koputaroa School between Levin and Shannon.

The action moves north for the road race on Sunday at Colyton School near Palmerston North over a 18km lap course. The under-13 to under-15 age-groups compete over one lap; under-16 to under-20 girls over two laps and the under-20 boys over three laps.

The final day is a Points race around the 3km lap circuit at Manfeild Autocourse with action from 9am for under-13 to 39km for the under-20 boys.

The image is free for editorial use. Credit: Jack McKenzie
TRIATHLON