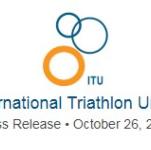 SALINAS, ECUADOR - While the year has been a long and exciting one, as the 2017 world cup season narrows down to its final races on the circuit, elites have the chance to race in the final sprint distance event of the season at the 2017 Salinas ITU Triathlon World Cup.

This will be only the second time that Ecuador has hosted the event, after first debuting on the ITU world cup scene in 2016. With a sandy beach start and a flat, yet technical bike and run course that has one small hill on each lap, this sprint will be the last time of 2017 that elites will line up for the 750-metre swim, 20-kilometre bike and 5-kilometre run distances.

Women’s Preview
The women will kick off the day of races by lining up on the beach first. Canada’s Dominika Jamnicky is headlining the start list, wearing the number one cap in a world cup for the first time in her career. Earning her best overall world cup performance at the Yucatan World Cup by finishing fourth, Jamnicky competes well in hot conditions, so Salinas is a perfect race for her to finish off her season with a potential first-career world cup podium.

All of the medal finishers from Salinas are not in the lineup this weekend, so the podium is wide open for the taking. Two of the strongest contenders to potentially step up to collect those spots are Vanesa De La Torre (MEX) and Cecilia Perez (MEX). De La Torre finished fourth in Salinas last year, which was her best world cup result in her career. Perez has never made a world cup podium before, but both Mexican women do well in the heat so will be using the Ecuadorian coast to their advantage.

Salinas will be only the second world cup race for Yuliya Yelistratova (UKR) since she returned to compete this season after having a baby. Her first race back was in Weihai, where she strongly finished 12th. She has experience getting on the world cup podium and like many other women on the roster, she also performs well in the heat.

Elizabeth Bravo of Ecuador will be the hometown crowd favourite of the weekend. Bravo is Ecuador’s only triathlete to have competed in the Rio de Janeiro Olympic Games, and has played a huge aspect in growing the sport in the small Latin country.

Other women to watch out for this Sunday is USA’s Tamara Gorman and Brazil’s Vittoria Lopes. Both women are young talent within the sport that have had breakout 2017 seasons. Gorman won the U23 women’s triathlon world championship title at the Rotterdam Grand Final last month and has continued to rise in the world cup results. It was two Americans who conquered the podium in Salinas last year, so Gorman is the hope to keep the U.S. success in Ecuador alive. While Lopes is a name that started to draw attention starting in the water. Racing in the World Triathlon Series this year, she pulled ahead as a swim leader on more than one occasion, also showcasing her ability inthe bike. She will most likely lead again in the swim in Salinas, setting herself up to get a first-time career medal.

Men’s Preview
Leading the men’s start list isMexico’s Cristanto Grajales. In the debut event in Salinas last year, Grajales earned the bronze medal; this year, he returns as the sole man from 2016’s podium. He has become a very well-rounded triathlete, performing consistently in all disciplines. However, he does exceptionally well in the run, so a sprint distance race is to his advantage.

Irving Perez is a Mexican compatriot that is also a strong contender for Sunday. He excels in hot conditions and at the shorter distance course, something he proved by winning the Yucatan World cup this season. Salinas is the right environment for him to pick up another world cup title.

Racing Salinas again for the second time is Russia’s Dmitry Polyanskiy. He has stacked his season with racing this season, competing with a full schedule. He has earned one world cup podium this season by claiming the silver medal in Tiszaujvaros. He is a very strong swimmer and also does very well in the bike, so he can be expected to be among the lead pack.

A rising talent is Brazil’s Manoel Messias. He has yet to break the world cup medal threshold, but made world honours the last couple years in the junior and U23 levels. However, he will be entering Salinas after winning the CAMTRI American Championships that was held in Puerta Lopez, Ecuador last weekend, so he has a success mentality to use to his advantage.
`
The man who took the silver medal in that race was Canada’s Taylor Forbes, who will also be lining up on Sunday. He will be joined by compatriot John Rasmussen, who is a strong swimmer.
The men’s triathlon program in Ecuador has been increasing improving over the years. Two men that could do well for the home nation are Ramon Armando Matute and Juan Jose Andrade Figueroa.
Click here for the full preview

ABOUT THE RACE:
The world cup circuit returns to Salinas for only the second time in ITU history, after the event debuted in 2016. Salinas is a coastal modern resort city in Ecuador, with wide beaches and attractively priced hotels. This Sprint Distance World Cup is mainly flat and fast with one small hill of 26.5 meters in elevation. The bike course and run course use the boulevard along the beach, called Malecon where beachgoers gather along the course to cheer on the athletes. The course then enters a Naval Base which provides security and quiet roads.

PRIZE MONEY:
$60,000 USD (equal for men & women)
LIVE COVERAGE:
Live coverage of #SalinasWC will be available with tweet updates on race day at @triathlonlive on Twitter.
COURSE PROFILE:
Swim - 750m - The swim will be a one-lap swim with a beach start.
Bike - 20km - The bike will be contested over four laps that will curve around the naval base with a11.6% slope.
Run - 5km - The run will be a two-lap course that stretches through town and along the beach front.
Click here for a course map