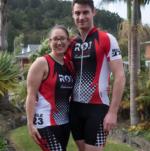 Auckland Triathlete Does Not Let Diabetes Control His Racing Ambitions

Andrew Good is looking to live up to his name and do ‘good’ by a charity close to his heart when he takes on the IRONMAN 70.3 Taupo in December.

30-year-old Good has lived with type 1 Diabetes for 25 years and is looking to raise awareness and much needed finance to help fund camps for young people living with diabetes. After a lifetime spent managing the illness and ensuring it does not control him, he knows better than most how important good support network is.

“I was diagnosed with Type 1 diabetes at age five, that’s 25 years ago. I’ve been living with the condition for a very long time and I won’t allow diabetes to dictate what I can and cannot do, it is a serious condition that takes a lot to keep on top of it, but I never let diabetes stop me from doing anything I set out to achieve. IRONMAN 70.3 Taupo is one of those activities I have set out to compete in and complete, and not let anything slow me down.”

Good will be racing for the Riding on Insulin (ROI) team at the December 9 event, an initiative that started in the United States and has spread throughout the world.

“I have been involved with Riding on Insulin for a couple of years, it’s an initiative that started in the United States that runs snow camps for youth with diabetes. ROI also have a large endurance team, which compete in around 100 Ironman and endurance events each year. The team encourages Diabetics (and their families) to compete in endurance events to raise awareness and help fund camps for young people living with diabetes.

“I have always challenged myself to stay active. I have done a half ironman previously and multiple marathons. I want to get ROI Endurance to extend their reach and get going in New Zealand, which is why we have entered in 70.3 Taupo and will be racing with ROI on our race suits.”

While ROI originated in North America, it already has ties to New Zealand through founder Sean Busby, who was diagnosed with type 1 diabetes at age 19.

“He came to New Zealand about six or seven years ago and fell in love with the place. In the last six years they have run a camp for type 1 diabetics at Snow Planet (indoor snow slope at Silverdale). It involves about 40-50 youths coming to Snow Planet and learning to snowboard and ski and learn how to manage their diabetes from a great supporter group of volunteers who are type 1 diabetics.”

Training has not been easy for the self-employed Media Manager, who enjoys the support of wife Haley who will also compete and raise money for ROI in Taupo in December. Andrew has completed the ASB Auckland Marathon for the past two years and raced in a 70.3 event in Napier about five years ago.
“It is quite difficult to get training in actually. We have a daughter who has just turned one and is taking up a lot of our time. We are squeezing training in where we can but it is not as much as we had hoped to get in, we are lucky that Haley’s parents live nearby so we can utilize their babysitting services from time to time, but it is still difficult to go out at separate times or go out together to get on top of this event.”
Andrew is swimming at the Northern Arena pool at Silverdale, but living in Orewa is eagerly awaiting warmer days so ocean swims become the order of the day.

As well as ROI, Andrew works closely with Diabetes Youth Auckland, a local charity also doing great work in the community to support those living with the disease.

“I just want to help raise awareness, raise money for the camps, but also raise spirits. If I can help pave the way for others or families with someone who is living with type 1 diabetes and show that they can continue to lead active and healthy lives, there will be some good to come from the pain that I might suffer on race day!”
TRIATHLON