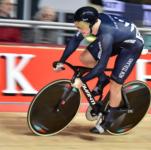 Cycling New Zealand has blooded some of its young development riders into the cauldron of the UCI World Cup competitions in Manchester and Poland.

They return home with the Vantage New Zealand Elite Team for next week’s Oceania Championships in Cambridge much stronger for the World Cup experience.

Head sprint coach Anthony Peden said it has been a baptism of fire with the Europeans at full strength for both events, with the Manchester event completed today.

“We felt this was the right time to blood them against the best in the world,” Peden said.
“All the Europeans had their top combinations here as they prepare for their Continental Championship. Our young riders will come back with a clearer understanding of where the bar is set when we step up their training load going forward.

“It will help them understand where the world is and I believe it will be a huge help to their development. They have responded really well over the two World Cups.”

Podmore went on to finish 10th overall in the keirin, winning her repechage but just missing out on the main final after placing fourth in the semifinal.

Multi junior world champion Campbell Stewart finished 10th in the Omnium competition, boosted with an excellent second placing in the points race behind overall winner Benjamin Thomas from France.
Campbell combined with former junior world championship medallist Tom Sexton to be 13th in the Madison, with Sexton impressive in finishing fifth in the scratch race on the opening day.

Dawkins (9.718) and Mitchell (9.734) impressed to qualify fifth and sixth respectively in the sprint although both went out in the second round of match racing on day two.

Earlier in the meet the youthful men’s trio of Castle, Bradly Knipe and Zac Williams were timed at 44.549s in the men’s team sprint qualifying to be 12th fastest overall, with Knipe lowering his personal best again for the opening lap.

CAPTIONS: Eddie Dawkins in sprint qualifying; Olivia Podmore wins her keirin repechage and Campbell Stewart in the men’s omnium at the UCI Track World Cup in Manchester.
The images are free for editorial use. Credit: Guy Swarbrick.
TRIATHLON