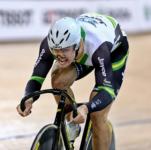 The Australian track cycling team will unleash a strong combination of world champions and world medallists at the Oceania Championships starting in Cambridge on Monday.

There are four world champions and four others who won bronze or silver medals this year in their line-up for the all-important Oceania titles that carry key qualifying rankings for next year’s World Championships.
The championships, which run from Monday 20 to Thursday 23 November at the Avantidrome in Cambridge, will also provide early bragging rights as Australia and New Zealand eye next April’s Commonwealth Games across the Tasman.

Leading the way for the Green-and-Golds is 25-year-old individual pursuit world champion Jordan Kerby, a former double junior world champion, who clocked 4:12 for his 4000m ride at Hong Kong, which was the third fastest time in history.

Included in the line up are Rohan Wight and Nicholas Yallouris who were part of the Australian Team Pursuit combination that beat the Kiwis for the gold medal at the world championships in Hong Kong this year.

Making a return to the endurance track programme is Leigh Howard, a triple world champion in omnium and madison, who is back on the track after six years on the UCI World Tour, with a weather-eye on the Commonwealth Games.

The battle in the sprint is sure to be a feature with current world champion silver medallist Matthew Glaetzer in strong early season form, after a win in the individual sprint at the World Cup in Poland and victory in the 1000m time trial in Manchester at the weekend.

The pairing of Kaarle McCulloch and Stephanie Morton, second in the team sprint at Hong Kong, will be the ones to beat in the women with Morton, the world champion silver medallist, second in the individual sprint at the Poland World Cup.

“It is an important event for both countries in terms of qualifying for the world championships, and it represents the start of a busy six months for the track programme,” said Cycling New Zealand CEO, Andrew Matheson.

“We would expect nothing less than a strong selection from Australia. It is what we want and we need, and it is sure to set-up some very exciting track racing of world class next week.”

There are 60 elite males and 40 elite females racing, with 50 under-19 riders spread among the official New Zealand and Australian teams, while other members of the Vantage New Zealand Elite squad and Subway Cycling New Zealand Performances Hubs will compete for their centres.

Details: https://oceania-track-championships.cyclingnewzealand.nz/
CAPTION: In-form Matt Glaetzer from Australia who will take up the cudgels against New Zealand’s world champion sprint trio in Cambridge next week.
The image is free for editorial use. Credit: Dianne Manson