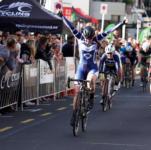 Cycling stars return to compete on the streets of Takapuna

Added to this is Waikato’s experienced Pip Sutton, the 2015 Under-17 champion Ally Wollaston (Auckland) and 2014 Under-17 winner Georgia Danford (Auckland).

Gough has recently returned from his first year of a professional road contract with the European-based An Post-chain Reaction Continental team, to rejoin the Vantage New Zealand Track team in preparation for the upcoming Oceania Championships.

He will take on fellow elite track squad teammates Nick Kergozou and Hugo Jones, while there will be competition from James Fouche (Auckland), who has competed in USA and Europe this year after finishing under-23 runner-up in both the road and time trial nationals, and seasoned professional Taylor Gunman, who has enjoyed a strong year with the British Madison Genesis team.

There will be interest in the efforts of Gaze, while unmatched on the mountain bike, is also more than useful on the road, competing in the famed under-23 Gent-Wevelgem cobbled classic in Belgium this year after finishing fourth in the elite time trial at the national championships.

Others to watch include Luke Mudgway, who rode for the RTS Monton Racing team based in Asia, and the experienced Roman van Uden.

The exciting multi-lap course takes in Hurstmere Rd and The Strand in the Takapuna CBD, with free entry for spectators. Racing begins at 2.30pm on Sunday 12 November with the Men’s Street Race, Open B Grade Men and Women, Under 17 Girls, Under 17 Boys, Elite women around 4.40pm with the Elite men schedule to start around 5.30pm.
TRIATHLON